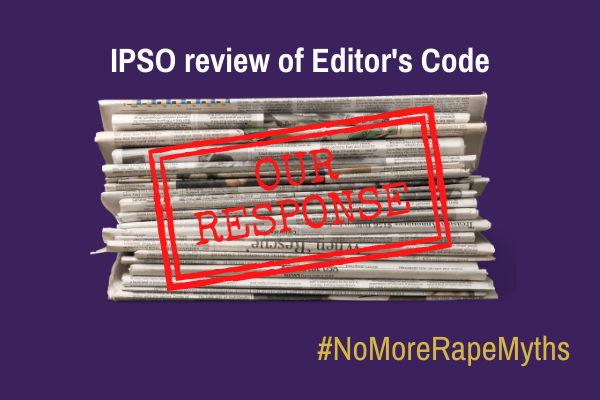 IPSO’s Review Consultation of their Editorial Code signifies a huge opportunity for us to get rid of rape myths and misinformation in the media.

In January this year, IPSO announced a complete review of their Editorial Code.  This follows pressure from ourselves and other organisations including We Level Up, who amongst their demands, were asking for support numbers to be provided after stories covering domestic violence cases where a woman had died.

We have responded to the review directly and have included included details of our 5 minimum asks which are easy to implement and would have an immediate impact on the way that sexual violence is covered by the media.

Our response is written in full below.

Response to the IPSO Review of the Editor’s Code

Nottinghamshire Sexual Violence Support Services (Notts SVSS) is a charity which supports survivors of sexual violence aged 13 and above.  Our range of services includes face-to-face counselling, telephone helpline support, Independent Sexual Violence Advisor Service (for survivors who have reported to the police or who are considering doing so) and a Survivors’ Support Service for people who have experienced sexual violence in an institution such as a school, children’s home etc.

We also campaign on issues which affect survivors of sexual violence, which include our #NoMoreRapeMyths campaign.  This campaign is important as the media helps to inform and develop opinion across society on many subjects and we know that what is said in the press directly impacts on survivors, how they understand their experiences and whether they choose to report or seek support.

Our #NoMoreRapeMyths campaign is an online Twitter campaign which openly and actively calls out incidents of poor media reporting, particularly where rape myths, victim blaming or reporting inaccuracies are apparent.  We also promote and celebrate instances of good reporting to help encourage future responsible coverage of this issue.  We are responding to the IPSO Review of the Editor’s Code as part of this campaign.

Points we would like the revised Editor’s Code to provide instruction on:

All articles dealing with sexual violence should include contact details for support organisations.

It is a widely known fact that most people do not seek support directly after experiencing a sexual assault.  In 2017-2018, three-quarters of all adult service users who contacted Rape Crisis Centres wanted support around sexual violence that took place at least 12 months earlier; 42% were adult survivors of child sexual abuse.

Before seeking support, a survivor will often use many different coping strategies.  We know that one of these will be looking for information on similar experiences that have happened to others, often through stories in the media.  After the first reports around Jimmy Savile hit the news around 100 reports of historic child sexual abuse made the headlines, similarly 1,700 people contacted the NSPCC during the first three weeks the hotline for survivors of child sexual abuse in football was launched.  Seeing articles on sexual violence through the media often prompts people to come forward for support and so provision of helpline/website information after such articles is vital.

The Editor’s Code needs to make it clear that whenever an article details rape, sexual violence or child sexual abuse that details of support agencies are included as standard.

Headlines should not undermine, minimise or excuse the issue of sexual violence, as this frames how the rest of the story is read.

Headlines frame the way that the whole article is read and extra responsibility is needed when these are written.  Too often we see headlines which are ‘jokey’ use puns or alliteration.  Rape is not a joke and the reporting of it should be responsible in its tone and approach.

Often we see an article that will correctly name an incident as rape in the main text, but the headline editor has created a sensationalised headline with the word ‘sex’ in the headline.  This is not only factually incorrect but it also suggests there is or could be some confusion around what happened.  Similarly, headlines need to follow the basic premises of law.  We have seen headlines which focus on an eight year old being the youngest victim of revenge porn, headlines where women are coerced into sex calling this sex-for-rent when it is rape, and where boys have been described as having participated in a romp, sex or a relationship, when they have been abused by their teachers, social worker or other adult woman.

The Editor’s Code should insist that headlines are written responsibly with their primary focus being on appropriate tone and accurate summarising of the article content.

For those of us working with and supporting survivors of sexual violence, we know that it is vitally important that sexual violence and rape is correctly named.  Whenever the terms rape and sex are interchanged by strong voices such as those in the media, this adds to the confusion.  It can prevent survivors from identifying what they have experienced and also minimises incidents that have happened.  It adds to the misconception that there is a grey area between rape and sex.  It is vital that the press, in covering such subjects, correctly identifies rape and sexual violence to help enhance public understanding.

The Editor’s Code must insist that appropriate terminology is used when covering sexual violence.

Articles on sexual violence should not include or appear next to images or links which undermine this issue.

Often, particularly where newspaper content is online, articles covering sexual violence are surrounded by sexually objectifying images, content, and links to other stories.  This placement undermines the serious content of the article and helps to blur the boundaries between sex and sexual violence.  We have also found on occasion, articles where a key word in an article (eg ‘sex’) is then hyperlinked to pages which contain content on sex, which in inappropriate.

The Editor’s Code must insist that the press draws a strong distinction between sex and rape and does not allow conflicting content and images to be shown alongside each other.

Commenting under online stories should be turned off

Despite much campaigning, we know that many people hold very judgemental views, particularly on the subject of sexual violence.  We often see, where comments are left on, members of the public saying things like ‘served them right…’ ‘what did they expect, having so much to drink,’ sometimes rape threats are also made.  This can have the impact of feeding misinformation whilst making other victims/survivors feel guilty and judged, which could in turn preventing them from seeking support.  Leaving comments on provides no newsworthy aspect and can lead to trolling and online emotional abuse.

The Editor’s Code should specify that comments should be turned off for all news stories containing rape and/or sexual violence.

Much of the reporting on the issue of sexual violence takes place as part of the coverage of cases going through the legal system.  The current Editor’s Code means that such coverage does not have to refer to previous days at court which can lead to an imbalance in coverage.

We often see articles which focus solely on the defendant’s testimony reporting verbatim what they have said.  This often includes unchallenged rape myths or a lack of reporting of the challenges made by the prosecutors.  Whilst we understand that the importance of reporting accurately what is heard in court, this also needs to balanced with what has occurred in previous days, eg the victim’s evidence, by referring to it directly in the text or by linking to a previous relevant article.

The Editor’s Code as it stands does not ensure balance in this respect and this omission needs to be addressed.

As part of the review of our first year of campaigning we found that examples of victim blaming and rape myths were rife in press reporting of sexual violence.  The focus is often on how a victim put themselves at risk rather than how the perpetrator chose to take advantage of their target.  This often occurs where a person has been drinking or was out late at night.  Of the articles that we looked at, alcohol was used as equally to blame the victim as it was to excuse the perpetrator – victims were seen to be putting themselves at risk, whilst perpetrators apparently ‘did not know what they were doing.’

It seems that the use of victim-blaming and rape myths is so imbedded in journalism, that turning this around will take a long-term, period of education.  We would like to see the most obvious rape-myths addressed in the Editor’s Code, with a longer-term aim, undertaken by IPSO, to work with organisations such as ours to review press articles and use information gleaned to help in the training of journalists moving forward.

The overall, long-term aim of the Editor’s Code should be for the overall eradication of rape myths and victim-blaming in press reporting on sexual violence.

We hope that you find this feedback into your review of the Editor’s Code useful.  We would be glad to work alongside you on issues relating to this to help you in your work ensuring that coverage of sexual violence by the press is responsible, accurate and appropriate.