We’ve Been Talking to IPSO About our #NoMoreRapeMyths Campaign 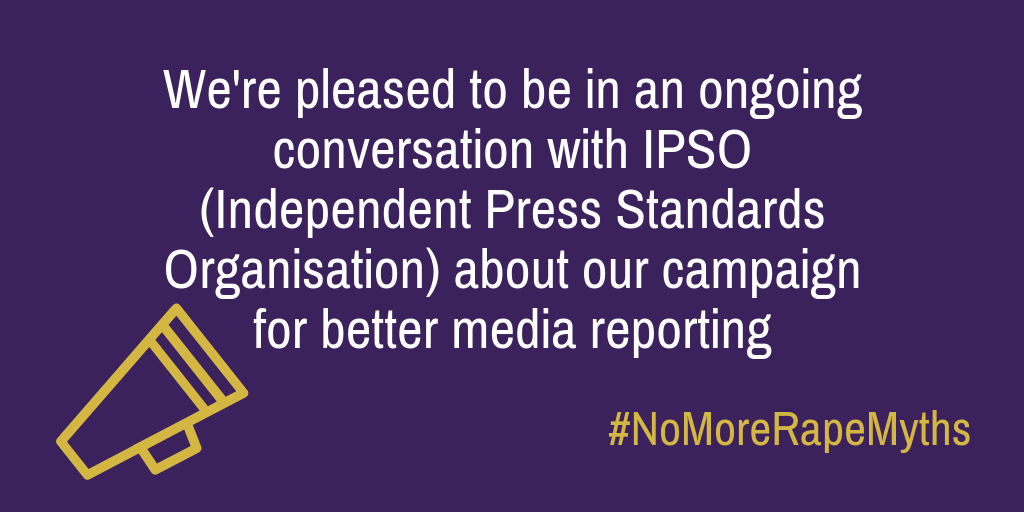 Rape myths and misinformation are prevalent in our society and this impacts on victims, survivors, and society as a whole. As part of our campaign, we have been talking to the Independent Press Standards Organisation (IPSO) about their work, work they are currently doing to improve the experience of survivors talking to the press and extra standards we would like the press to adhere to.

How the Media Portrays Sexual Violence is Important
We know that the way the media covers sexual violence, both as a topic in dramas and in the news, can have a direct impact on the public’s perception and understanding of this issue. If the media gets it right, movements are created and opinions are changed, but if they get it wrong this can further spread misinformation which is damaging to victims, survivors and society as a whole.

Statistics taken from the first 22 press articles looked at as part of our campaign show that:

Clearly the above is worrying and, while it appears that a lot of coverage aims to be sensitive and accurate, there is a huge gap between what is attempted and what is attained.

IPSO Guidance for Survivors
Earlier this year, IPSO announced that they were going to be looking at how the media talks to survivors of sexual violence. In particular, they were creating a guide for survivors, to help them understand what interactions with the media might look like and help them decide if this was something they might like to do. As our campaign was already raising issues around media coverage, we spoke to IPSO about becoming involved with this project and about our campaign.

IPSO were really pleased to hear from us and we have had telephone meetings with them and also helped to feed into the drafting of their guide for survivors, to ensure it provides the information they need in a way that is easy to understand.

Their guide for survivors of sexual violence was recently launched alongside updated guidance for journalists writing on this issue. We have also put these links up on our website.

As part of this conversation, we will also be pressing for IPSO to take on five minimum standards, which we believe are easy for an editor to do and which will impact hugely on a way an article is framed and understood:

Join Our Campaign
The more people who support this campaign, the greater the impact will be in effecting change. If you are on Twitter you can support us by: