A year of challenging violence against women and girls 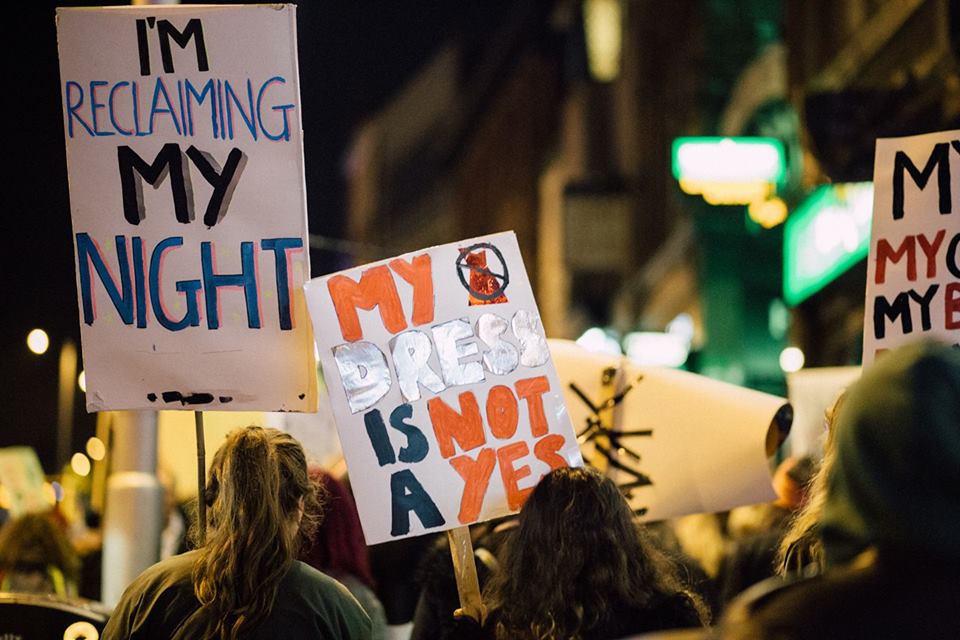 From the 25th November (the International Day for the Elimination of All Forms of Violence Against Women and Girls) and the 10th December (Human Rights Day), groups around the world commit to 16 days of action to end gender-based violence. But work to keep women safe from men’s violence continues all year round. This year, during #16Days, the organisations in Nottingham who provide specialist domestic and sexual violence services look back together on some recent successes. Here’s some of what we’ve achieved over the past year that help keep women safer in Nottingham and Nottinghamshire.

New services were funded for survivors of rape and sexual violence
Notts SVS Services are delighted to have been awarded further funding to secure and enhance their Independent Sexual Violence Advisor (ISVA) Service and Survivors’ Support Service. The two services are of key importance to survivors, helping them to access the Criminal Justice System and the Notts SVSS’s Survivors’ Support Service. This service supports those who have experienced institutional child sexual abuse, including those who are sharing their experiences with the IICSA Truth Project.

The new funding means that there will be:

Tender was successful to provide support at the Children and Young People’s SARC
In April 2018, the Sexual Assault Referral Centre (SARC) provision changed across Nottinghamshire, with one SARC providing support for children and young people and the Topaz Centre assisting adults.

Notts SVS Services worked collaboratively with other organisations to tender for the provision of the East Midlands Children and Young People’s Sexual Assault Services (EMCYPSAS). The tender was successful and now trained and experienced staff provide Crisis Worker support in this new provision, helping young people feel reassured after an assault and during forensic medical examinations.

The ‘No More Rape Myths’ Campaign was launched
We know that the way the media covers sexual violence and their use of ‘rape myths’ can have a direct impact on the general public’s perception and understanding of rape and sexual violence. In March 2018, Notts SVS Services launched a new social media campaign @NoMoreRapeMyths to directly challenge poor reporting and press for wider change, whilst also recognising good media coverage on this issue.

Early statistics from the reports we covered showed that:

The campaign is already making an impact; we have advised IPSO (Independent Press Standards Organisation) on the development of their leaflet for survivors and are conversing with them regularly about concerning articles.

Nottinghamshire’s Misogyny Hate Crime policy to be debated for national rollout
This year, Nottingham Women’s Centre’s Misogyny Hate Crime campaign celebrated its biggest milestone in its movement towards national rollout. Following on from the flagship work in Nottinghamshire by Nottingham Women’s Centre and Nottinghamshire Police, Labour MP Stella Creasy called for the introduction of misogyny as a motivating factor in relation to the ‘Upskirting’ Bill. Whilst ministers decided that this wasn’t the right vehicle for seeking such a change, they announced that they would fund a Law Commission review into how sex and gender characteristics should be considered under hate crime law, and whether new offences (notably, Misogyny Hate Crime) are needed. This is a hugely exciting national statement against misogyny, and Nottingham Women’s Centre are extremely proud to have been part of setting the bar high in Nottingham.

There was a large increase in the number of survivors of domestic abuse accessing support
Women’s Aid Integrated Services (WAIS) directly supported 6,189 women in 2017-2018. That’s a 22% increase on the number of women WAIS supported the year before. Although on the surface increasing call rates may seem to signify a rise in domestic abuse incidents, this is far from the truth. Under-reporting of domestic and sexual violence is one of the most prominent problems due to the wide-ranging number of barriers survivors face in disclosing. The local increase in calls speaks as a reassuring tribute to the local sector’s progress in reaching, signposting and empowering more and more survivors to speak out.

#TimesUpNotts has organised its launch event for Saturday 24th November. The objective of the event is to facilitate a conversation with women around the challenges and solutions of tackling sexual harassment at work. Going forward, the network will use women’s voices to inform the development of its trainings and resources for workplaces.

Councillor Toby Neal, Portfolio Holder for Community Protection at Nottingham City Council, said: “It is the responsibility of every man and woman to take a stand to end violence against women. No woman should ever be made to feel afraid, intimidated or threatened. I would like to encourage anyone suffering from this type of behaviour to come forward. Nottingham City Council will treat any report extremely seriously and ensure support services are available to help those in need.”

Prevention work with children and young people being expanded in Nottinghamshire County
Local charity Equation has recently received funding from the National Lottery’s Reaching Communities Fund to deliver 12 domestic abuse prevention projects across 6 secondary schools in Nottinghamshire over the next 5 years. At any time, 1 in 10 children are living with abuse with 16-18 year olds being most at risk, making work with this age group particularly crucial. The projects are designed to raise awareness of domestic abuse, curb the development of abusive behaviours, build young people’s aspirations for their own relationships, as well as develop their resilience, confidence and self-esteem in order to best equip them for the choices they face in their formative years.

The Misogyny Hate Crime impact evaluation report launched showing overwhelming public support for policy
In collaboration with the University of Nottingham and Nottingham Trent University, July marked the launch of Nottingham Women’s Centre’s Misogyny Hate Crime impact evaluation report, making national headlines. Over 87% of people surveyed thought that classing misogyny as a hate crime in Nottinghamshire was a good idea. The report also highlighted the extent of misogynistic hate incidents in the everyday lives of Nottinghamshire women but suggests that the policy has effectively worked to empower women to report.

Of the 679 participants in the evaluation, 93.7% had experienced or witnessed street harassment in Nottinghamshire, including unwanted sexual advances (48.9%), groping (46.2%), sexually explicit language (54.3%) and indecent exposure (25.9%). Yet due to the on-going work of this project and its collaboration with Nottinghamshire Police, of those who reported, 75% had a positive experience and 100% would report again.